The Wood's Edge by Lori Benton

I’ve been hearing tons of great things about Lori Benton’s latest novel, The Wood’s Edge, so I just had to read it for myself. Before I tell you my thoughts on the book, here’s the premise, borrowed from Lori’s website: 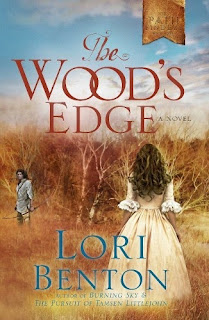 At the wood's edge cultures collide. Can two families survive the impact?

The 1757 New York frontier is home to the Oneida tribe and to British colonists, yet their feet rarely walk the same paths.

On the day Fort William Henry falls, Major Reginald Aubrey is beside himself with grief. His son, born that day, has died in the arms of his sleeping wife. When Reginald comes across an Oneida mother with newborn twins, one white, one brown, he makes a choice that will haunt the lives of all involved. He steals the white baby and leaves his own child behind. Reginald's wife and foundling daughter, Anna, never suspect the truth about the boy they call William, but Reginald is wracked by regret that only intensifies with time, as his secret spreads its devastating ripples.

When the long buried truth comes to light, can an unlikely friendship forged at the wood's edge provide a way forward? For a father tormented by fear of judgment, another by lust for vengeance. For a mother still grieving her lost child. For a brother who feels his twin's absence, another unaware of his twin's existence. And for Anna, who loves them both--Two Hawks, the mysterious Oneida boy she meets in secret, and William, her brother. As paths long divided collide, how will God direct the feet of those who follow Him?

At the end of chapter one, I gasped and thought, “There’s no way this has a happy ending.” Throughout most of the book, I was torn between hating it and falling in love with it. As a woman who was almost kidnapped twice as a young girl, I wasn’t sure I could get past the fact that Reginald Aubrey had stolen a baby to raise as his own child. But like Good Voice, the child’s mother, my heart took a journey I didn’t expect during the reading of The Wood’s Edge. I found myself hoping each character involved, by theft or by blood, would come to a divine peace about the whole situation.

I cannot tell you what happened, of course, for that would spoil the story for you. However, I can tell you that waiting until mid-April of next year for the release of the next book in the Pathfinders series (A Flight of Arrows) will be a difficult trial of my patience.

The most amazing part to me of The Wood’s Edge was how author Lori Benton wove a thread of hope through a tale borne from a hopeless scenario. It takes quite the artist, with a large dose of inspiration from the original Author, to craft such a work of art. Lori’s books may torture me at times, for the tough topics she broaches, but there is a strain of innocence, a sweet beauty that never fails to whisper to my heart.

Thank you to Blogging for Books for giving me a copy of The Wood’s Edge in exchange for my honest review.

Readers, how has God turned your mistakes around for His good purpose? Tell us of a time when you received or gave unexpected forgiveness.

Thanks for stopping by today! I look forward to hearing your thoughts in the comment section below. And don’t forget to drop by next Monday for my latest article.

Would you like to be my guest? Here's how to submit an article.

Do you need a copy editor? Here are the services I offer.
Posted by Andrea Cox at 6:00 AM