Right now it's Sunday evening, and I'm watching The Weather Channel's coverage of now-Tropical Storm Harvey. There is severe flooding throughout southeastern Texas, my home state. Thankfully, I live in north Texas so am safe from the storm's path of severe wind and rainfall. But that doesn't mean I've been uninvolved in the storm.

While I have not been able to physically take part in any rescue efforts, I have done what I can do: pray.


All over social media (Facebook and Twitter are the sites I use a lot), I saw Hurricane and Tropical Storm Harvey updates with the hashtags #PrayingForTexas and #Harvey2017. These were encouraging to me, and I started using them too, hopeful that they would encourage those most affected by the storm.

I don't use these hashtags lightly either. My mind and heart have been in a constant state of prayer for everyone in the path of Harvey. I've prayed for safety, comfort, encouragement, and aid. I've prayed for spirits to be uplifted, for souls to discover God's love, and for the storm to dissipate and flooding to recede swiftly.

A Note from the Psalms

Hey y'all! I hope you're having a very blessed day. Something that recently blessed me was looking at some notes I'd jotted down in one of my many Bibles. (One for every occasion? Maybe....)


Take a look at this verse from the Psalms:


"Lord, lead me in Your righteousness because of my adversaries; make Your way straight before me."
Psalm 5:8 HCSB

A stuttering author and a beautiful thief. What could possibly go wrong?

Before I get into why I enjoyed this book, let me first share with you the two things that bothered me. Firstly, there were lots of minor expletives, words that many people wouldn’t consider bad but, in the context, quite likely are. Examples include blighted, blasted, blazes, etc. In and of themselves, not terrible words. But like I said, within the context of how they were used and intended, they were replacements for the really bad ones, which equals the same thing to me.

Secondly, there was a moment when the leading man, a Christian, “could hardly begrudge” the leading lady “mumbling and grumbling and growling words no lady should know.” This was disturbing to me. Curse words should never be okay from a Christian perspective—whether saying them or being okay with other people saying them—because they do not honor God, and a Christian’s goals should include honoring God with every word we speak or think. Since Peter was thinking that he couldn’t fault Rosemary for cussing up a storm, it seemed to me that he was okay with it, that he was condoning it. That, to me, was inappropriate and out of character of him.

Because of that bit of a faith flub, I couldn’t give more than three stars, even though I really wanted to. You see, A Name Unknown was a rich, deep, thoughtful story. Its characters were sublime—minus those couple of things I mentioned—and intriguing and complicated. The plot was delicious and kept me riveted to the pages. The pacing was spot-on, bringing fast action scenes and ebbing pauses to let one catch one’s breath. Sweet, salty, sumptuous, suspenseful, secrets… this novel had a little bit of almost everything, and it kept me guessing on most points. I particularly appreciated Ms. White’s attention to detail and historical accuracy. Those are a couple of things I have come to expect with her books, and I was delighted to see they had continued to be strong and richly written in this novel, one I’d looked forward to for months prior to its release.
Read more »
Posted by Andrea Cox at 6:00 AM No comments:

How do you handle a traffic jam?

Yesterday morning, I read Philippians 4, and the two verses that leapt out at me were these:

My family headed home from a weekend trip shortly after I read that section, and wouldn’t you know that would be the day of bursts of heavy rain that slowed us down, a side trip that was for naught, and multiple traffic jams that had us inching along slower than a slug. 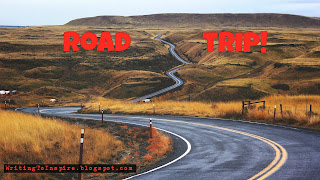 But I didn’t panic. Or freak out. Or get frustrated at any of it.