Sometimes deciding what to write is hard.

I could write an entire catalogue of articles on how many times I’ve struggled with what to write about for my blog articles. But that’s not what I’m talking about here.

How does one choose which story to focus on when there are a dozen, two dozen, a hundred ideas floating around in one’s mind? 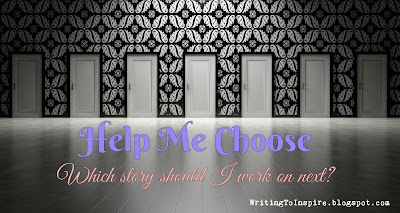 Sometimes it’s really hard, and sometimes it really hurts, to have to choose. It hurts because once a writer has invested time and energy and precious brain cells building a particular story world populated by a bunch of intriguing characters that the writer begins to love, it’s really tough when a new idea comes along and begs for attention. Sometimes a writer has multiple projects, all with great settings and problems and characters and pets. The tough choice then gets even tougher, because in order to say yes to one set of characters and their world, the writer inevitably has to say no or not now to all the rest.

For this writer in particular, that’s really painful.


I’ve struggled with this conundrum for several days, and once I caved and worked on a secondary project for a while, writing out a really great scene. But I made a choice a while back to focus on one series until I got it done and out there for people to read. Now, I know I can always change my mind since I’m not under a contract, but I also know that people have invested time and energy into cheering for me in my budding writing career. They’ve rooted for me and encouraged me when I’ve gotten a bit blue about it all. They’ve brainstormed with me when all ideas fled my brain. They’ve listened when I had to rant about the unexpected twist one of my plots took that just happened to change everything.

Yet, even though I made that choice to stick to my current series of four books until they’re available, I still find myself getting the itch to work on two completely different projects instead.

So I don’t know what to do right now. I am unsure which project, which story I would rather focus on at the moment.

How would YOU like to help me decide which project to focus on for the next few weeks?

Take a look at the following story ideas, all of which are in some phase of writing or editing for me right now. Vote by letting me know in the comment section which one you like best. I’ll tally up the votes at the end of the week and let you know the results in my next article here on Writing to Inspire.

Option #1
A woman wakes up in a hospital unable to remember anything about herself, but the doctor recognizes her immediately – only he doesn’t want to tell her the truth.

Option #2
Several ladies head out on a cross-country road trip, but each one’s secrets cause problems along the way.

Option #3
A former singer hides out with her daughter in a quaint horse town, but a stranded journalist thinks she could be just the story he needs to revive his stalled-out career. 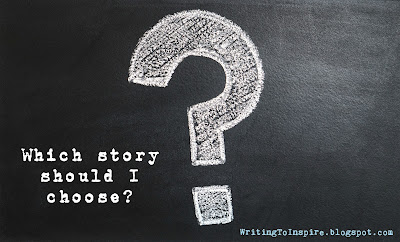 How do you decide when you have
several great options to choose from?

I love the concept of all three, but I choose #2. I already want to know the secrets.

Lucy, thank you! Like you, I love all three stories. I think that's why I'm having such difficulty picking one to work on this month.

Love your Option #2...that sounds like it could be really interesting!

My vote is option 2. Sounds intruiging! And adventurous.

Thanks, Beth! I know, it's a tough choice, isn't it? I appreciate your vote.

Thanks, Debbie! If it turns out anything like what's in my head right now, it will be interesting indeed!

Thanks, Erika! I fell in love with that story as soon as the idea struck me. I'm hoping it will be a grand adventure!

Since all three of those seem to have been written, I think you should combine #2 and #3 into one story. :) You asked. ;)

Wow. You do like to complicate things, don't you? Thanks for your input!

Thanks, Bess! I'm excited about that story too.

Thanks, Olivia! That's a story that's been in my heart for many years.

Argh! *Holds head* that is frustrating because they are all so good and I want to read them right now. Lol! I am going to go with 1 or 3 and I would recommend picking the one you find yourself fantacising the most about. �� Just what ever you do. . . *Whispers* please hurry up. :D

Victoria, you're making me laugh, girl! I'm sorry you're in such agony over it, but now you know how I feel. I love all three stories so much and can easily see myself working on each of them. I hope I can hurry fast enough to please us both.

Hi! Hard choices. I'm ranking them instead of picking one!
#1. Amnesia with a fun angle?
#3. Horses plus what I've heard about this story...I'm eager
#2. Also sounds like a great idea!

Hannah, I love how you ranked them. Yes, the amnesia one definitely has an angle. Whether or not it's fun... you'll have to wait and see. :)

You had me at horses! I vote for option #3! They all sound SO good though! :)
All the best with your writing, Caitlyn :)

Not all the time. I just like to be different. ;)

I'd go with one... and then two... and then three. lol. But they all sound amazing! ;) I have a hard time with having soo many story ideas, too. I'm constantly getting new ones and have a running list from just the past couple years that is of dizzying length. lol. I usually write what I feel the Lord leading me to do/finish up at that moment, but sometimes I cave and do a bit on random things too. ;) And sometimes, readers want sequels or books like that, and... I aim to please, so if I get a worthy idea for a sequel I've made room for those too. :)

Thanks, Jessica! It's great to know they're all wanted. :)

Thanks, Amanda! That idea is the newest one, but I already love it just as much as the other two. Doesn't take long around here to fall in love with a great story idea.

Fantastic advice, Vee! Thank you. I also have a running list of ideas -- some small, some more thought-out -- in my computer. If I ever get completely stuck, I browse through those files for inspiration. It's great fun looking back at all the random ideas that have trickled in over the years. Some are so silly I don't think I'll ever write them, but they're really good to give me a laugh -- and I usually need one about that time, since I don't know what to write or am battling writer's block.

My goodness, no wonder you are struggling to decide. I am having a hard time deciding which one I'd like to read first but think I will go with #2. Take a day, or part of a day, go away with the just a notebook and see what the Lord has to say.

Rebecca, I love this: "Take a day, or part of a day, go away with just a notebook and see what the Lord has to say." What a sweet idea! I might just have to take you up on that. Especially once the project is decided upon. I'll need a flood of ideas for scenes and plot twists after that!

Option #3 Love having children and horses in a story. Can't go wrong there. But no matter what you write Andrea. I will be anxious to read it:) Happy writing, sweet friend.

Thanks, Loraine! I totally agree about the children and horses thing. Really great additions to any story.